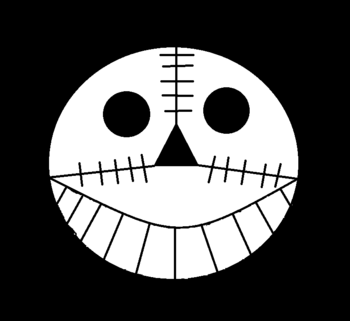 ''This ain't no place for no hero/This ain't no place for no better man...''
Most SIs get powers, or start off weak, or any of a multitude of ideas...but all, or at least most, remain human. Most One Piece SIs meet up with the Straw Hats, join their crew, and have some very entertaining adventures. This poor bastard gets neither. Follow Yoshimura Kaneki through the South Blue and beyond, as he joins a crew that, for better or for worse, is destined for infamy...
—The opening on Archive Of Our Own
Advertisement:
"How the hell am I the moral compass here?
—The protagonist
"I am Grigori Vinci, Captain and surgeon of the Nightmare Pirates, and I am currently out of fornications to give."
—The guy who bosses around the protagonist.

The Butcher Bird is a One Piece/Tokyo Ghoul Self-Insert Crossover fanfic starring the eponymous Butcher Bird, Yoshimura Kaneki, who, a few years before canon, finds himself on an unknown island, his body changed into that of a flesh-eating ghoul. In short order, he finds himself joining a pirate crew...but, unlike many One Piece fics, not that of the Straw Hats. The crew, called the Nightmare Pirates, and their journey is the focus of the story, rather than the canon of One Piece. Kaneki himself shares Protagonist duty with his captain, Grigori 'Alley Doc' Vinci.

This fic is mostly notable for its large number of OCs and its dedication to being an Original Flavour expansion of the One Piece world, starting off in the South Blue and working through the Grand Line with very few appearances from the majority of canon characters.

It can be read on Spacebattles

The Butcher Bird contains examples of: