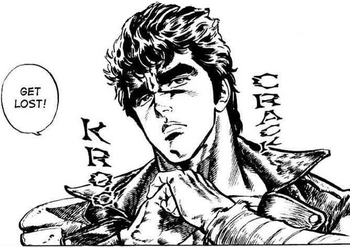 You should listen to him. Or else, You Are Already Dead.
"You cannot shake hands with a clenched fist."
— Indira Gandhi, Prime Minister of India
Advertisement:

Knuckle Cracking happens when a character cracks their knuckles to show that they are ready to deal out a whuppin' or tackle a challenge. Frequently used as an intimidation tactic in fights, this is a particularly effective way of showing that The Stoic is bothered enough by someone to get serious. Cracking knuckles may also be sign that a character is ready to get to work on a particularly arduous task, especially one that requires a lot of muscle. Comes in two varieties: Type 1, shown to the right, involves raising one's hands and proceeding to use hand A to fold the fingers of hand B in towards hand B's palm, and then immediately using hand B to do the same with hand A. Type 2 involves cracking both hands at once by lacing the fingers together a la Finger-Tenting and bending them away from the palms, pushing one's hands either down towards the ground, forward away from your chest, or some angle in between, such that one's arms take on a wishbone shape. A less common variant, sometimes seen in martial arts films, involves cracking the knuckles one-handed by slowly and dramatically clenching one's hand into a fist.

Sometimes the knuckle cracking sound is removed, maybe for the sake of realism, maybe because some people find it too squicky and then it will be replaced by the hero crushing something in their hand. Bonus points if it's made out of metal, points removed if it's only a paper note.

Sometimes other joints are cracked as well, most often in the neck. Cracking joints in the shoulders or back provides a convenient excuse to flex your muscles and show off your powerful physique. Another reason for this is to flex the muscles, loosen the joints, and open the blood vessels which helps to improve blood-flow and reduce the strain and potential damage from overexerting a stiff body part.

A Sub-Trope of Kinetic Clicking. Compare and contrast with *Crack!* "Oh, My Back!", in which a character's joints crack painfully, often to show that they are aging or have an injury.