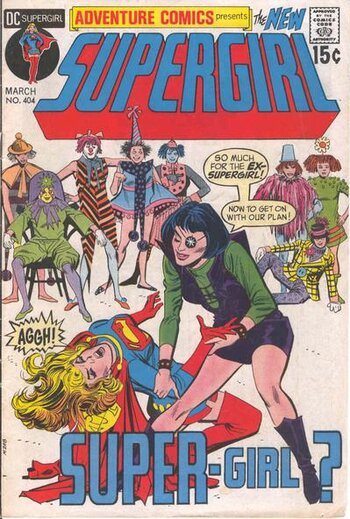 Starfire's Revenge is a Supergirl storyline told in Adventure Comics #402-407, written and drawn by Mike Sekowsky and published in 1971.

A crime lord who goes by Starfire (and who has nothing to do with Teen Titans' member Starfire, being actually nine years older than Marv Wolfman's character) has decided it is time to attempt to take over the government after spending years building her gang's wealth and power. Nonetheless, she does not want to have to worry about super-heroes, so she gets her head scientist Dr. Kangle to create a power-nullifying pill, and decides to test it on Supergirl beforehand.

Starfire's henchmen manage to get Supergirl to swallow one pill and they get her shot while her powers are vanishing. When they report back to Starfire with news of Supergirl's successful assassination attempt, their boss decides to proceed with her plan's next phase: tricking large numbers of gullible, downtrodden people into joining her gang and commiting crimes by falsely claiming she intends to start a revolution to tear down an unfair and discriminatory status quo.

Believing one of her potential enemies is gone, Starfire feels pretty confident in her success. Though, Supergirl is not dead. Kangle's pill was not completely effective, and her powers returned after she got shot by Starfire's goons, saving her life. After crawling back to her home, Supergirl realizes something has messed up with her powers, taking them away at irregular and unpredictable intervals. Now she needs to use a powered suit to make up for her malfunctioning powers as an unknown enemy is raising an army.