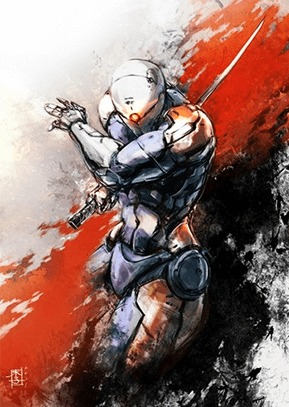 Ninjas, as far as popular culture is concerned, are cold, efficient killers. What better way to make them even deadlier than to take out the human factor and make them into literal death machines? Nothing makes a ninja's arsenal more awesome than some high-tech upgrades!

The Cyber Ninja is the ninja of the future, but unlike your typical technologically enhanced assassin they still use the traditional ninja image with either traditional, or upgraded, Stock Ninja Weaponry, and almost never a gun - they're still ninjas after all! To keep with appearances, you can expect these ninjas to have some sort of personal cloaking device and body modifications that would enhance their already superhuman conditioning. Being espionage agents, you can bet that they would be skilled hackers when it comes to information.

The heyday of the Cyber Ninja would have been the Eighties, especially with the rise of Cyberpunk mixed with Japan Takes Over the World. These ninjas would often be the perfect agents for high-tech corporate espionage or assassinations in such stories, or could even serve as a mook army for an evil tech corporation. Even after Japan's economic bubble burst, the combination of the ninjas' traditions with futuristic technology is one that sticks with popular culture to this day.

A subtrope of Ninja Pirate Zombie Robot. Compare Samurai Cowboy. Will tend to overlap with Street Samurai and Corporate Samurai, but both tropes envelop more specific concepts (the former is a freelancer in a campaign against authority while the latter is a corporate agent and more civilized than the former).

NOT related to Ghost Pirate, though a fight between the two would be totally awesome.