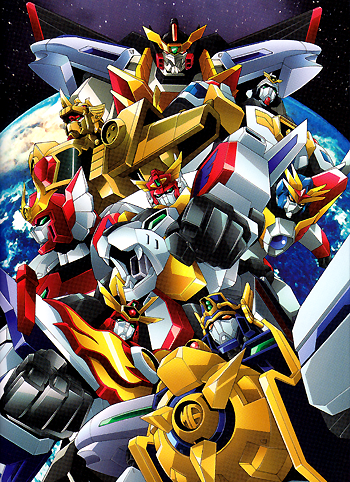 In The '90s, Takara brought an end to animated "Generation 1" Transformers material in Japan, following a chilly reception to 1989's Transformers Victory and an overall worldwide decline in popularity resulting in a franchise hiatus lasting until 1996's Beast Warsnote In terms of television, that is; both the Transformers toyline as well as the comics by Marvel retained popularity with Western consumers way into the 90s, which also led to the cancellation of the OVA series Transformers Zone. Sensing that the coming Japanese kids of the decade wanted something different and wanting to remain relevant in the market, Takara struck a cooperative deal with Sunrise (which had just recently become one of the most famous studios in Japan due to the explosive success of the Gundam series) to develop a new television franchise and set of toy lines, one that would also be separate from the (then fraught and difficult) relationship Takara had developed with their American Transformers partner Hasbro. This would all lead to the development of the Brave Series.

A ninth series, The Saint of Braves Baan Gaan, was planned but never produced. The material meant to be used in this canceled series was later recycled into the plots for the Brave Saga Video Game and concepts from it later appeared in the unrelated Super Robot anime GEAR Fighter Dendoh (along with a few concepts from a planned GaoGaiGar sequel). There's also another video game, New Century Brave Wars (Which includes Might Gaine, J-Decker, Dagwon and Gaogaigar, as well as Zettai Muteki Raijin-Oh), which has its own Original Generation mech, Quantum Leap Rayserver.

Not to be confused with a Manhua series of the same name.

Names to know for this franchise:

Common tropes that are seen throughout the franchise are the following: