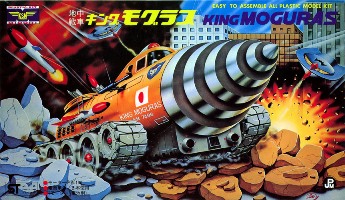 Pierce the heavens with your DRILL!
It would be the greatest mining vehicle ever constructed: fifty feet long and fully mechanized, powered by compressed steam. It would boast three primary drilling and cutting heads, positioned at the front of the craft; and a system of spiral shoveling devices mounted along the back and sides would scoop the bored-through ice, rocks, or earth back out of the drilling path. Carefully weighted and meticulously reinforced, this machine could drill in an almost perfect vertical or horizontal path, depending on the whims of the man in the driver’s seat. Its precision would be unprecedented, and its power would set the standard for all such devices to come.
— Boneshaker
Advertisement:

The concept is simple, really. A tracked vehicle with one or more great big drills bolted onto the front. What it is varies. Theoretically, this may be intended as a mining and/or tunneling vehicle, and indeed, many of them do use them to tunnel beneath the earth. Others use them to break through walls and other barriers. Quite a few of them are used directly against enemies. There is an occasional variant in the form of a Drill Jet, which is exactly what it sounds like.

Given the status of drill with Super Robots, any Combining Super Robot has a good chance of having one of these as a component.

Subtrope of Tank Goodness. Often involves Fast Tunnelling. Connected to This Is a Drill.