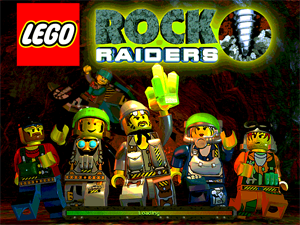 LEGO Rock Raiders is a 1999 LEGO theme based around mining on an alien planet for Power Crystals, sporting fifteen sets featuring mining vehicles, other craft, minifigure packs, and a large base set. What it is best remembered for, though, is its two very different tie-in games, one for the PC and one for the PlayStation. Accompanying the games and toys were nine mini-comics, several other comic appearances in LEGO-related magazines, and three young reader books.

The L.M.S. Explorer, a Cool Starship tasked with observing and exploring uncharted planets, is damaged by an asteroid field and caught by a wormhole on its voyage back to Earth, and is warped into another galaxy and left crippled and low on fuel. The ship's scanners are still operational, and pick up a nearby planet in the solar system, dubbed Planet U, that is rich in Energy Crystals which can be used to restore power to the L.M.S. Explorer and get them back to the Milky Way. However, Planet U proves to be a hostile place with high volcanic activity, frequent cave-ins, little breathable air, and populated with hostile wildlife, including the powerful Rock Monsters, whose diet consists solely of the Energy Crystals that the L.M.S. Explorer so dearly needs.

The Rock Raiders sets and story overall provide examples of:

The PC game provides examples of:

Tropes exclusive to the PlayStation game:

Tropes exclusive to other media: