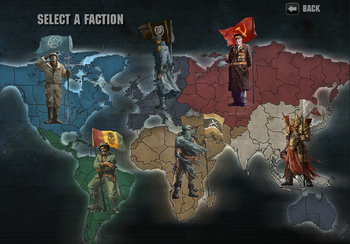 Warhammer 40,000 meets World War II with more than a little of Command & Conquer: Red Alert tossed in for good measure. That is the best way to describe March of War. Billed as a free-to-play, online, cross-platform, multiplayer, turn-based, strategy game by ISOTX(same company behind the Iron Grip series so you got an idea of the mindset of the developers). Taking place in an alternate version of the 1940s, which is amongst other things heavily infused with a massive dose of Diesel Punk, in which a world war is being waged by six unique factions. They are:
Advertisement:

March of War was shut down in early 2016. The game also has a wiki here