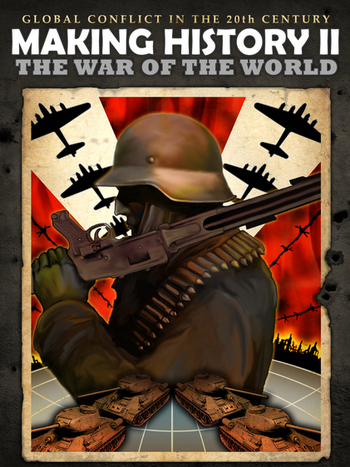 Making History is a series of Turn-Based Strategy games, set in and around the World War II period. Current instalments in the series are:

These games allow you to take control of any of the nations of the era and rule as you see fit. While the main purpose of the game is to prepare your country and fight in WWII (WWI in case of the third game), the series is heavily open to Alternate History, and as such, each game can vary wildly. While many nations will do what they historically did without your interference, timelines of games can range from very historical to Stupid Jetpack Hitler. Of course, there's nothing stopping you from continuing a game for as long as you want past the usual end.

What if Those Wacky Nazis had acquired nuclear weapons? What if the Soviets had started the war? What if Cuba became a major empire? All of these and many more can be explored by the player.

Unrelated to the 1996 novel (although their premises do overlap) and the 2017 comedy series of the same name.