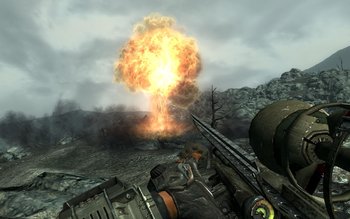 "Whenever I see a world untouched by war - a world of innocence, a world of lush forest and clear rivers - I really just want to nuke the crap out of it!"
— Terran Ghost, Starcraft II
Advertisement:

Now you are become death, destroyer of worlds. The video game version of Nuclear Option or Nuke 'em, except here it's your responsibility to turn the key.

The nuclear weapon is one of mankind's most awe-inspiring achievements, so naturally video games have jumped on the activation of one as the ultimate thrill for players. Nothing quite matches the satisfaction of washing your enemy away in an explosion so bright it whites out the screen for a few seconds.

Oddly, nukes appearing in games are rarely as powerful as their real-life counterparts. Shooters in particular are usually forced to create a strange kind of portable mini-nuke with a yield comparable to an ultra grenade and use that instead. This will resemble a nuke as closely as possible, but on a far smaller scale. (While portable nukes might not be as far removed from reality as you'd think

, you still wouldn't want to use them within 50 metres of the target.)

Compare Nuke 'em, for when the player isn't directly involved in the launch. On the opposite end of the scale to Nuclear Weapons Taboo. Can serve as a Deus ex Nukina.