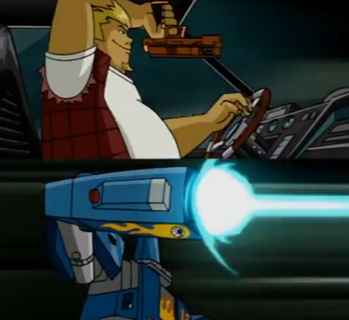 A sufficiently large gun (larger BFG to Wave-Motion Gun) robs its user of being able to look cool by actually wielding it. Solution: Provide a device for aiming and firing the thing by remote control that actually looks like a human-scale gun itself.
Advertisement:

Truth in Television: laser designator systems for aerial bombs and missiles often fit this. The laser emitter is carried by a person or mounted on a vehicle and is used to guide the actual missile (which is usually launched from a ship or plane) to its target. Related to Helmet-Mounted Sight and Laser Sight. Both are real life uses of a similar principle. See a photo of an actual military grade laser designator

◊ which is not quite so "gun-like" as some fictional depictions.

Often fills the "special" slot of Standard FPS Guns, and may or may not be equipped with a Laser Sight to aid the user.

Not to be confused with a gun that fires puppets.

Compare Motion Capture Mecha for a similar phenomenon of guiding a big thing using a miniature, and Target Spotter for characters who tell distant allies where to aim their attacks. A Flare Gun may be used as this.