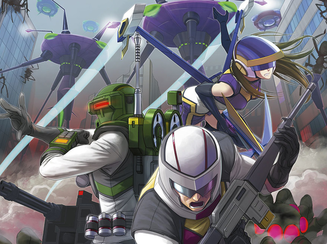 Do you have what it takes to topple the titans?
"EDF! EDF! EDF!"
— The EDF soldier's battlecry throughout the series
Advertisement:

Earth Defense Force is a series of low-budget Third-Person Shooter games developed by Sandlot and published by D3 Publisher.

20 Minutes into the Future, scientists have discovered radio wavelengths from outer space, thus proving the existence of extraterrestrial life. Unfortunately, these aliens aren't here to give humans an olive branch and welcome baskets, they're here to take over the Earth. Moreover, before they do so in person, they deploy shock troops in form of swarms of giant bugs, robots, dinosaurs and other assorted BMovie Monster Mash. Not to sit idly by and let the aliens pave a path of destruction, governments of the world establish the eponymous Earth Defense Force, a unified multinational military effort, to stand up against the invaders.

One of the main draws of the series is how the game makes the player feel like they're in a Japanese Kaiju BMovie as they take on legions upon legions of enemies and Godzilla-sized (And occasionally Godzilla-looking as well) bosses. The gameplay throughout the series is relatively simple: for the most part, you take control of an infantry soldier of the EDF to shoot down any and all aliens throughout many stages of the game. Along the way, you can find armor power-ups that increases your soldier's maximum health and weapon boxes to obtain new weapon; more powerful weapons are usually found by playing through the missions in harder difficulties. It's as simple as that... right until you get stomped into the ground.

The games in the series so far includes:

Has no relations to the Shoot 'em Up Earth Defense Force developed by Jaleco.

Good luck out there, the Earth is counting on you!

We will defend the Earth from the alien invaders with the following tropes!