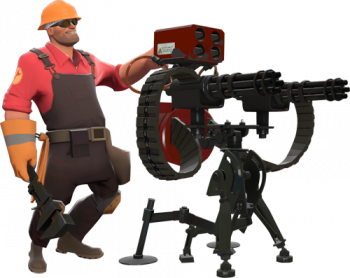 Designed by me. Built by me. And you best hope... not pointed at you.
"Turret, what would I do without ya?"
— Axton, Borderlands 2
Advertisement:

In the realm of Video Games, most know of The Beastmaster and The Minion Master. Their major strength comes from their summoned companions. The Turret Master takes similar cues, but places his defense more in line with technology and traps.

In a nutshell, the Turret Master is a character with the ability to summon a stationary defense in the form of an automated Turret. Bear in mind this needn't be a literal turret: it can be anything that fulfills the general role of a stationary defense, even if it's just Torchlight's stick that shoots fire.

What exactly this ability entails varies a bit: Some suffer from Weak Turret Guns, while others are invulnerable but on a restricting timer. Oddly enough, it's more common for a character like this to be fairly powerful even without this ability than to be a Squishy Wizard as The Minion Master commonly is. Sometimes they might be able to pick their turrets up and wield them like a normal hand weapon. This ability is more common in Rogue- or Archer-styled classes. Classes like this can also usually form other traps, as well.

You play one of these in most Tower Defence games.

See also The Engineer, The Minion Master, The Drone Deployer and The Beastmaster.

The Engineer Monkey can deploy turrets to pop even more bloons.

The Engineer Monkey can deploy turrets to pop even more bloons.