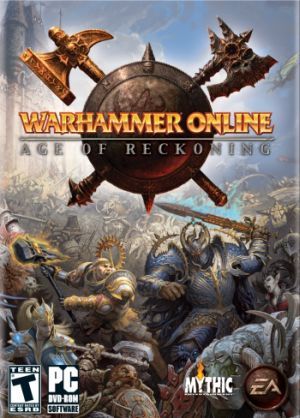 Warhammer Online: Age of Reckoning, usually abbreviated as WAR, is an MMO set in the world of Warhammer, the second of its kind. An earlier Warhammer MMO made by Climax was in development around 2003, but that first version fell through spectacularly when it tanked at the E3 and Games Workshop pulled its funding. Several years later, the license was acquired by Mythic Entertainment, who chose to develop it in a graphically brighter, more accessible format than their predecessor. It was released in late 2008 to record breaking sales, and received great critical acclaim. Unfortunately, early issues in server stability and a population thinned out over too many, combined with the release of the second World of Warcraft expansion at the height of these problems, led to it losing much of its early subscriber base and having large reductions in its development team.

Like in Mythic's previous MMO, Dark Age of Camelot, the emphasis is in Player Versus Player and their trademarked Realm versus Realm system. There are two sides with three races each: Order (the human Empire, the Dwarfs and the High Elves) and Destruction (Chaos, specifically Tzeentch's followers, the Dark Elves and the Greenskins). Every race has four unique classes open to them, leading to quite a bit of variety and some serious Alt Itis.

Unfortunately, the game was shut down on December 18th 2013, as the licence agreement Mythic had with Games Workshop came to an end at that time.

Fortunately, it is being saved from Lost Forever by the folks at Return of Reckoning

; it is still very early in testing however.

Most of the universe's general tropes can be found on the main Warhammer page.