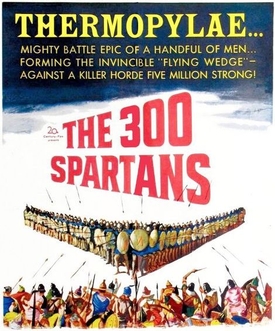 The 300 Spartans is a 1962 Sword and Sandal film depicting the Battle of Thermopylae, directed by Rudolph Maté and starring Richard Egan as Leonidas, Ralph Richardson as Themistocles and David Farrar as Xerxes.

When it was released many saw it as an allegory for the Cold War. Nowadays it's probably best known as part of the inspiration for Frank Miller's famous graphic novel 300 and its subsequent film adaptation by Zack Snyder.