Straight for the Commander 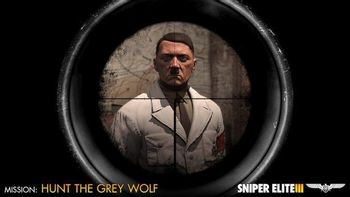 Alternate History in the making. Or not...
"If you want to pluck a chicken, it's much easier if you decapitate it first."
— War Marshal "Mad Dog" Kazan, Judge Dredd, "Apocalypse War"
Advertisement:

Usually in warfare, the commander stays back and is protected by his army, making him a rather difficult target. That being said, the army you're up against might be overwhelmingly huge, exceptionally skilled in combat, or even Nigh-Invulnerable. Thus, despite the difficulty, it might be better to try to take out the commander, in hopes of not having to fight the army itself. Especially if the commander has the ability to turn mooks more dangerous.

Finding him usually isn't too hard — just look for the guy with the huge Chest of Medals, the most Bling of War or the most conspicuous uniform. He may also be the biggest. The enemy may make things even easier for you by putting its commander in the front, possibly even with a bad formation protecting him.

Be warned, however, that the commander might be expecting this and may be way scarier than any of his soldiers, especially if his army uses Klingon Promotion or he is a Colonel Badass or Four-Star Badass! A Despair Gambit might be helpful in this case.

Use of this strategy rests on the hope that the enemy is a Keystone Army and the commander its Achilles' Heel. When successful, it usually results in a Decapitated Army, and even if it doesn't, the confusion and delays while the enemy reestablishes the Chain of Command can result in exploitable opportunities. Sometimes, however, it results in an Evil Power Vacuum instead, which may actually make the situation worse.

This doesn't only apply to armies. Whenever a species with a Hive Mind is led by a Hive Queen or some similar central location for the mind, destroying it will often lead to the whole army either shutting down or being thrown into aimless, bestial chaos.

This is often effective for The Minion Master and Mook Commander. Draw Aggro is a useful way to defy this, as long as it's not the leader drawing the enemy attention.

Also see Achilles' Heel. Subtrope of Flaw Exploitation. Is an Instant-Win Condition in some examples. Smart commanders may employ a Decoy Leader; a savvy army will clear away as many bandits as possible and wait for a clear and close enough path before targeting the ringleader (in which case, the Second Stratagem may be used first). Compare Shoot the Medic First, when the healer is first to get targeted, and Shoot the Mage First, when the powerful wizard gets hit first.

Ninja Brian kills the Dick Elders in one fell swoop and the Dystopia collapses in a day. Danny even lampshades how comically fast that was.

Ninja Brian kills the Dick Elders in one fell swoop and the Dystopia collapses in a day. Danny even lampshades how comically fast that was.