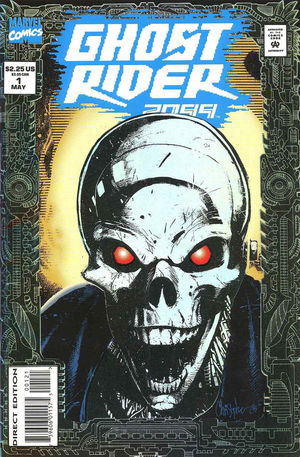 In Transverse City, where Detroit once stood, there is a ghost cast in steel. Dead hacker Zero Cochrane, his mind plucked form the net by subversive computer intelligences and placed in a fearsome chromed shell, is still searching for something to place faith in. Until he can find something worth spit in this world, the Ghost Rider will continue to haunt the streets of the future...
— 2099 Genesis (1996)
Advertisement:

Ghost Rider, as told by the Marvel 2099 universe. It was part of the "second wave" of 2099 titles, created by writer Len Kaminski and artist Chris Bachalo (in what was only his second job for Marvel, though he left after the first three issues to devote all his time to Generation X.) Out of all Marvel 2099 titles it leaned most heavily into the cyberpunk elements. The title character starts out as a stereotypical outsider to society as a gang member and a hacker. There were very little supernatural elements and A.I.s and cyberspace were central to the main story arc.

When a rival gang attacks Kenshiro "Zero" Cochrane and his hacker pals, his physical form bites the dust and his consciousness ends up in the Cyberspace. In there, he meets the Ghostworks, a group of artificial intelligences who offer him a second change. Zero accepts, receives a robot body modelled after the original Ghost Rider and soon rides the streets, righting wrongs and battling villains.