Webcomic / No Need for Bushido 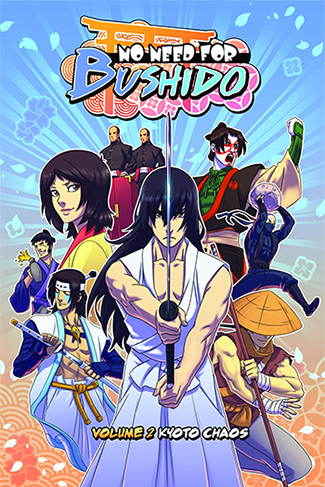 Volume 2 cover
Ina: Look samurai boy, I have no need for bushido! Now put me down, go back there, and die with honor!
Yori: Sorry, too busy rescuing you.
Advertisement:

No Need for Bushido

is a webcomic set in feudal Japan, the plot starts out with a princess looking to escape an Arranged Marriage to the son of an infamous warlord. Almost as soon as she runs away from home, she stumbles upon a group of bandits, and is saved (well, sort of saved) by a kind if ditzy young samurai. Turns out the young man is the same guy that she was supposed to marry, and he too has fled his clan, albeit for slightly different reasons.

As tensions between their clans rise, the two start encountering all sorts of weird characters who will have their roles to play in upcoming events. By the time they've gotten to the major showdowns, the team consists of:

Of the above, only Ina can't hold her own in combat, although she's proved herself to be an excellent strategist. Which is a good thing for the group, because they need all the help they can get as they try to prevent a war and survive clashing with a squad of powerful assassins, not to mention the ninja mercenaries, kung fu priests, genocidal warlords, gun-toting armies, a prophecy about the end of the world, and worst of all, family baggage and dynastic politics.