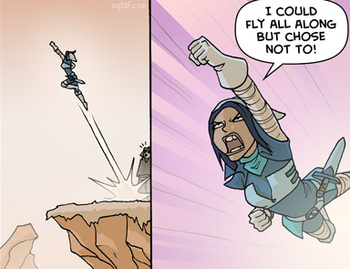 Bajoran social worker: Our computers don't work. I can't get a technician to come out. We're not exactly a top priority.
Garak the tailor: Perhaps I can be of service?
Dr. Bashir: You can fix computers?!
Garak: Oh, I dabble with isolinear data subprocessors. It's a hobby of mine.
— Star Trek: Deep Space Nine, "Cardassians"
Advertisement:

How did a character suddenly acquire a needed skill?

By an unrelated previous life experience he never knew would prove so useful, sometimes a Retcon. In other words, the character always had the skill, but You Didn't Ask.

A character who is an actor is a sharpshooter because he had to learn it for a role. A writer is an expert on medieval history because she had to research it for a book.

Common with older, gray-haired characters. You never think that your mother or grandmother could've had a life before you were born.

Combine this with Character Development to get Taught by Experience and Took a Level in Badass. See also I Know Mortal Kombat, Taught by Television and Instant Expert. Compare New Powers as the Plot Demands, where not even the character knew that he had the new skill all along. If you did, in fact, ask, so it has been mentioned before, that's Chekhov's Hobby; if the actual training is shown, it's Chekhov's Skill.

See also Deus ex Machina, a similar and often related concept. The polar opposite of this trope is Informed Ability. I Minored in Tropology is a Sub-Trope. Not to be confused with Knew It All Along, which is sort of an in-universe version (the character only claims to have known), but related to knowledge, not skills. Compare Suddenly Bilingual.

This trope used to be called "I Know Kung Fu" (a reference to a scene from The Matrix involving an Upgrade Artifact which actually exemplifies Instant Expert); that name now redirects to I Know Karate.