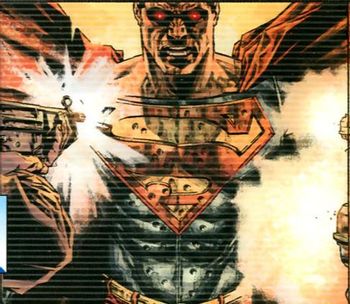 He can't be bargained with. He can't be reasoned with. He doesn't feel pity, or remorse, or fear. And he absolutely will not stop, ever, until you are... brought to justice.
"Are you feeling the pressure? You're alone in a room, your friends have been picked off one by one... now it's just you and him!"
— The Joker (to an unlucky henchman), Batman: Arkham Asylum
Advertisement:

The Mook Horror Show is a scene that plays out like a horror/slasher film, but casts the hero as the monster. Depending on the hero, it could involve Let's Split Up, Gang! and slinking through shadows, a Five Rounds Rapid followed by a frantic retreat, or any other situation that attempts to show how cool the hero is by emphasizing the terror of his foes.

Unless it's a darker Anti-Hero involved, the mooks probably aren't being slaughtered in horrifying ways, unless they happen to be intelligent robots, aliens, or monsters. If the minions are human, that sort of conduct would probably be bad for the hero's publicity (if the public ever has a chance to find out). However, war stories may relax this rule — killing enemies in wartime is more often seen as justified.

This trope is a frequent component of the Roaring Rampage of Revenge or One-Man Army, may involve a Foe-Tossing Charge and often overlaps with Villainous Valour, with the Big Bad — or The Dragon, if the Big Bad isn't present — cast as the Final Girl. Sometimes used to demonstrate that Dark Is Not Evil. It's often a key component of the Terror Hero's act. May also be invoked by a hero to Pay Evil unto Evil to a villain who enjoys subjecting others to this type of thing to give them a taste of their own medicine. They may also play it up for various reasons. Among others, they're probably going to not fight you at 100% if they're too busy screaming in blind terror of you. Contrast with Sparing the Final Mook, where after fighting off many mooks, the hero allows a last one to flee or otherwise surrender.

Not to be confused with a show in which the mooks look like creatures from horror films; that's Red Right Hand. Also doesn't overlap at all with A Clockwork Orange — even though it did have mooks as main characters, and they did find many things "real 'orrorshow." See also The Joys of Torturing Mooks.