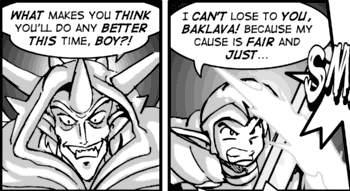 "The humblest citizen in all the land, when clad in the armor of a righteous cause, is stronger than all the hosts of error."
— William Jennings Bryan
Advertisement:

So The Hero and some opponent (usually the Big Bad or The Rival), adherents of two opposite ends of any given scale of ideology, duke it out. Whether they are fighting over their difference in opinion or something else, it is immediately apparent to the viewer that there is supposed to be much more than life, death or the fate of the world at stake here: The outcome of this battle decides whose personal philosophy is correct.

But you can always count on the Hero to win. Why? Because Right Makes Might, and the hero is right.

This is obviously intended to be An Aesop on how The Good Guys Always Win and Justice Will Prevail. In these cases, the implication that Right Makes Might comes off as an equivalence, which is most likely not what the writers intended. Often, the writers will make the opponent Kick the Dog by fighting like a Heel, which will result in either the hero winning anyway through brute force, or the enemy's Karmic Death. Other times they'll make an opponent want revenge rather than justice, taking away from whatever righteousness their cause had. That being said, it's still a slightly more acceptable philosophy than the inverse: Might Makes Right.

This trope can be more or less justified by the story showing just why the Right philosophy is better (even for winning in combat) in the end. One possibility is that the good guys rely on character-building virtues like dedication and teamwork while the villains bluster and bully their way through life, leaving the latter unready to face a real test. If nothing else, the belief that Right Makes Might could make it happen by encouraging the heroes or demoralizing the villains. It could also be that the hero's resolve and dedication to an idea that they hold to be greater than their self interest, allows them to go past limits the villains wouldn't dare, even to making the ultimate sacrifice. After all, the villains tend to value their lives above all and see defeat as failure whereas the heroes see stopping the villain as victory itself and surviving in one piece as a luxury.

Other times this trope is taken more literally as it might be the righteousness of the hero that allows them to use resources not available to the bad guys in the form of Only the Chosen May Wield,Only the Worthy May Pass, Only the Chosen May Ride or they are chosen by the Empathic Weapon or a Living Weapon. The hero's virtuous heart may also make them a candidate by a The Chooser of the One, especially in instances where the story has The Chosen Many.

Very prevalent in shounen anime and western comic books, but really, this has been used to deliver morals throughout history. It was even assumed in ancient times in Western civilization to work in real life, on the logic that God or gods would help them win. It is still often considered true for more nuanced reasons, which essentially amount to the fact that Evil is easy but self-destructive, while Good is Difficult, but Awesome.

If the defeated party acknowledges the wrong of his/her/their ways, this may also include Defeat Means Friendship. If the meaning of the battle is supposed to be particularly obvious, the characters will actually engage in a "No More Holding Back" Speech or "The Reason You Suck" Speech before or during the battle, explaining their particular beliefs, the lessons they've learned and why they have faith that they will carry them through this battle successfully.

Though usually done with a hero and somebody darker, this can also be done in a A Lighter Shade of Grey or A Lighter Shade of Black scenario, to show that, while their ideas and worldviews might still be rather flawed, the winning side at least has a better understanding of how the world should be or at least has more points right than the enemy. Eg: While a A Lighter Shade of Black villain might not exactly believe in the powers of truth, justice or honor, he might still be a firm believer in Pragmatic Villainy and consider the Stupid Evil behaviour of his opponent pathetic and disgusting.

Not to be confused with Might Makes Right, which is where one side gets to make the rules because they are stronger.

This is one of the main components of Japanese Spirit. See also: Heroic Resolve, As Long as There Is One Man. Contrast Written by the Winners, which deconstructs this belief by pointing out that due to Values Dissonance, every side of a conflict will always believe they prevailed over the other because their cause is the right cause.