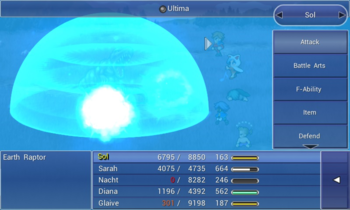 In Eastern RPGs, there is usually one spell or a set of spells available late in the game that make every other attack and technique in the game pale by comparison.

After all the tweaking of weapons, stats and armor, magic almost never hits as quickly, consistently, or powerfully as it would if you just run up and hit something with your basic attack. Although healing spells are always useful, Summon Magic tends to be the only offensive magic that'll hit a bunch of enemies for great damage late in the game. This is usually because, while physical attacks improve substantially with new equipment, only gaining new spells will make magic function better. This is especially true for status-affecting spells, which the enemies in the last quarter of the game or so are almost always immune against.

So, to give the magic wielder something to do in the end-game, there's this trope. There is often an "Ultimate" spell which is hard to find or learn, and which blows all previous spells of its type out of the water. If it has any others of its type to begin with.

These will frequently become a Disc-One Nuke if you can somehow get it early in the game or keep the spell when you start a New Game+.

Compare with Infinity -1 Sword, the weapon version of this trope. Can be a version of Infinity +1 Sword if this magic technique is optional and by the time you get it, there's nothing left to use it on. Contrast with Linear Warriors, Quadratic Wizards. May be related to 11th-Hour Superpower.