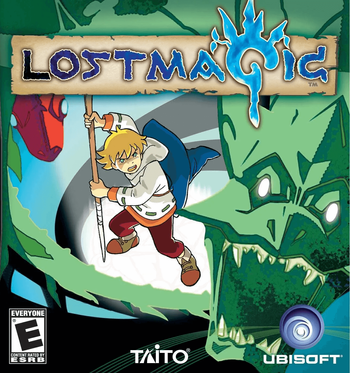 LostMagic is a 2006 video game for the Nintendo DS, made by Taito Studios and released outside Japan by Ubisoft. It advertises itself as an RPG, but it's really a Real-Time Strategy game.
Advertisement:

LostMagic follows the story of Isaac and his battle against the maddened Diva of Twilight.

This is a story of the age ushered in by the passing of the Great Creator, divine architect of our world. The people were long protected by the Six Forms of Magic and the Seven Wands left to them by the Creator. The wielders of magic, Magicians, maintained law and order. The Seven Wands were entrusted to seven especially powerful Magicians, called Sages, and passed down from one generation to the next. Thus the power of the Creator was kept safe, and the many benefits of magic made the people's lives rich and easy. In this way, a thousand years of golden, blessed peace continued across the world. But a fateful event was to forever change the world. The Diva of Twilight, a Sage and keeper of the Wand of Balance, lost all hope in those she was charged to protect, the people.

Disillusioned and angry, she called forth monsters — terrible creatures from another realm — into the world. The death knells of the golden age tolled across the land as the monsters ravaged towns and killed wantonly. Many of the other Sages, the defenders of the people, succumbed to the power of the Diva. Hope, now little more than a flickering candle, was about to burn out completely.

Then, a youth by the name of Isaac appeared...

Isaac, a 14-year-old boy separated from his parents amid the chaos enveloping the world, is found by a venerable Magician who lives deep in the old forest. Taking him as her student, the Magician begins the boy's training in magic. Not long afterward, Isaac's father appears before him in the forest. Without saying a word he hands Isaac a Wand and then is gone. "What did father want to say to me?" Isaac wonders.
His desire to find his father is about to spark a great adventure! For this is the story of hope, however small, in a world ravaged by despair.

LostMagic's main shtick is the runic circle control. Press the L button (R if you switched to left-hand settings) and a magic circle will appear in the Touch Screen. Scribble your runes on it — the more accurate, the more powerful — and you can cast spells. Overall, due to a maximum of 18 runes available and the Duo Runes system, LostMagic has about 400 spells, each with a different effect.