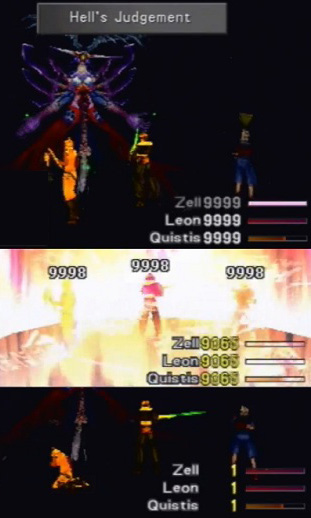 You're going to feel it tomorrow... but it makes sure you'll be there to feel it. This trope is for any of those attacks that appear to do a ridiculous amount of damage, but on closer inspection actually have the rather strange effect of reducing one (or more) party members down to their very last Hit Point instead of inflicting normal (possibly lethal) damage. Lesser versions may not leave the target with strictly 1 HP, but relative to the scale of damage typically dealt in these battles, the end result is the same — regardless of your character's HP beforehand, you are now on the threshold of Critical Existence Failure.

So what happens if you already have only one Hit Point when struck by this attack? In most cases, that amazing psychedelic rainbow shockwave (or whatever) attack will have no effect whatsoever, or may be labelled an automatic "Miss". However, sometimes even this attack is obligated to inflict a minimum of Scratch Damage and will actually kill the character unless they heal themselves (even slightly) in the meantime.

Should you fall victim to these kinds of attacks, your safest action is simply to Heal Thyself the first chance you get ... or you can also use this chance to unleash a Desperation Attack of maximum power. But be very wary: Even Scratch Damage leads directly to a Critical Existence Failure.

Suffering this can leave you open to Cherry Tapping. Indeed, some enemies with this ability have an attack which deals a single hit point of damage as their only other attack. Alternatively, a clever user might pair this trope with a Damage Over Time status affliction beforehand, resulting in the affliction doing the finishing blow at the end of the turn after the subject has been reduced to 1 health, preventing them from being able to respond to it on the next turn.

Compare and contrast Last Chance Hit Point (where the ability to survive an attack with 1 HP is associated with the defender, not the attack itself).

See also One-Hit-Point Wonder (where having one HP is the standard) and One-Hit Kill (where the attack doesn't even spare a single hit point).

Alternative Title(s): HP To One