Literature / Angel in the Whirlwind 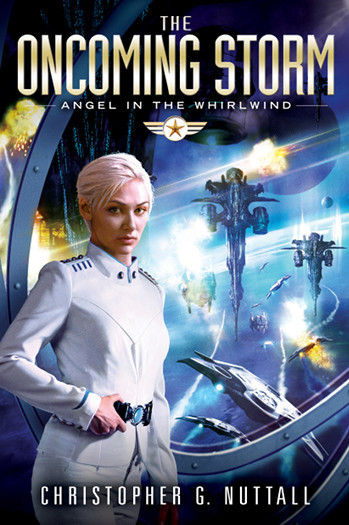 Angel in the Whirlwind

It's the year 2420 and humanity has largely recovered from the cataclysm of the Breakaway Wars, but war looms between two new power blocs: the mercantilist Commonwealth of Tyre and the tyrannical Theocracy. In the face of the coming war, the Commonwealth has taken the unprecedented step of forcibly annexing the strategic Cadiz system and is now mired in a bloody war of occupation with the locals.

In the middle of this mess is Lady Katherine "Kat" Falcone, the youngest daughter of the powerful Duke Lucas Falcone, who has been prematurely promoted and placed in command of the Commonwealth Navy's newest heavy cruiser, HMS Lightning, charged with inspecting the defenses of Cadiz for the King. She finds that the situation is worse than anyone expected: the fleet holding the system is in horrible disrepair, the admiral in charge has his head jammed firmly up his own backside, and war isn't coming in a couple years, it's coming within weeks.

Stuck with a first officer who mistrusts her, an armada in disarray, and enemy agents in abundance, can Captain Kat Falcone get the Commonwealth into fighting shape before all hell breaks loose?