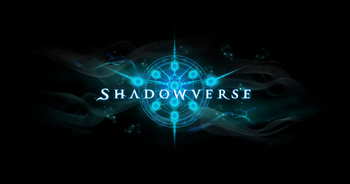 Shadowverse is a free-to-play Collectible Card Game developed by Cygames. Orginally released in Japan, it was later released in iOS and Android devices in June 17th, 2016 in the U.S., and later in Mac and Windows in October 28, 2016 available at Steam. Shadowverse is very similar to Hearthstone: Heroes of Warcraft, but according to Word of God, unlike Hearthstone, Random Number God has a smaller impact in match outcomes.

In retrospect, Shadowverse is considered to be a Spiritual Successor to Rage of Bahamut after the English version failed to be successful in the west (mainly due to numerous Screwed by the Network moments with dropping many events). Regardless, the game still has the anime style graphics and cards, with even English voice acting to boot. Unlike Rage of Bahamut, Shadowverse has succeeded in the U.S., in addition to being one of the top played Collectible Card Games in Japan.

Players can play using cards from seven different factions (with the eighth added in the Chronogenesis expansion), each with its own unique playstyle and cards.

Shadowverse has expansions every three months, each one released at the end of the quarter, and its devs conduct balance changes at the end of every month, starting from mid-2017. The expansions are as follows:

See the Analysis page for a more in-depth look at the current meta decks in Shadowverse.

An anime adaptation began airing on 7 April 2020, which puts the focus on a separate cast that plays the game itself, rather than any of the in-game plot and characters. This led into a Switch adaptation, named Shadowverse: Champion's Battle, due to release in November 2020