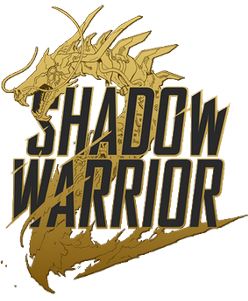 Got enough Wang for all of ya!
"I used to have it all. Then I fucked up, and saved the world."
— Lo Wang
Advertisement:

Shadow Warrior 2 is the follow-up Flying Wild Hog's offbeat Shadow Warrior (2013) shooter following the further misadventures of former Corporate Samurai Lo Wang. On June 10, 2015, publisher Devolver Digital announced the game. An announcement trailer soon followed, confirming the game for PC, PlayStation 4 and Xbox One. The game also features four-player co-operative multiplayer. The game was released on PC in October 2016, and for consoles in May 2017.

Five years have passed since Lo Wang shattered the alliance between his deceitful former boss and the ancient gods of the shadow realm. Despite noble intentions, Lo Wang's efforts to annihilate the darkness corrupted the world, creating a strange and savage new order where humans and demons live side by side. Now surviving as a reclusive mercenary on the edge of a corrupted world, the formidable warrior must again wield a devastating combination of guns, blades, magic and wit to strike down the demonic legions overwhelming the world. Lo Wang can battle alongside his fellow ninja buddies online in four-player co-op, or go it alone in spectacular procedurally-generated landscapes to complete daring missions and collect powerful new weapons, armor, and arcane relics of legend.

The third installment, Shadow Warrior 3, was released on March 1, 2022.