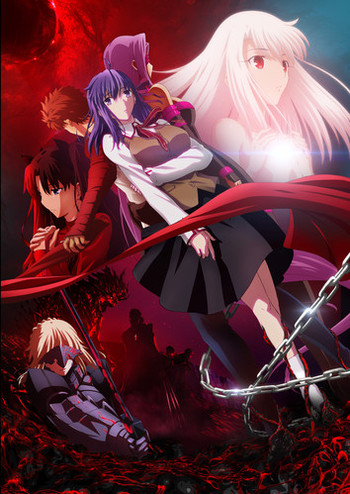 Fate/stay night: Heaven's Feel is a 2017 - 2020 trilogy of anime movies adapting the third and final route of the visual novel Fate/stay night, directed by Tomonori Sudou and produced by studio ufotable. First announced in 2014, Heaven's Feel was originally going to be released as a single film, but was split into a trilogy so as to include all - or at least most - of the vast amount of story contained in that story arc of the visual novel, which is by far the longest one in the game.

The story starts off more or less the same as the previous two routes: at the end of the Fourth Holy Grail War, Kiritsugu Emiya rescues and adopts a young boy named Shirou, but passes away a few years later, leaving young Shirou trying to leave up to his adopted father's ideal of becoming a "Hero of Justice" who can save all people, despite having learned only some basic magecraft to do so.

Ten years later, the Fifth Holy Grail War starts, and Shirou, now in his late teens, gets dragged into the conflict by accident, including inadvertently summoning his own servant: Saber, the same servant who served his own father in the previous war. He also forms an alliance with fellow classmate and secret mage Rin Tohsaka, who also participates in the war, and her mysterious servant, Archer. From there on, the story completely deviates from what was seen in the previous two routes.

This trilogy presents an alternate take on the Fifth Holy Grail War from that seen in Fate/stay night [Unlimited Blade Works]. This time, the story focuses on Shirou's budding romance with his junior schoolmate Sakura Matou, but in the process, he uncovers a dark secret about her and her family that threatens to destroy the world. In this situation, Shirou will have to choose between upholding his ideal of "Hero of Justice who can save everyone" and his desire to protect the girl he loves over everything else.

The story of Heaven's Feel is, by far, the darkest in all of Fate/stay night, both in tone, themes and imagery, being often akin to a horror story. Expect Anyone Can Die, even for characters who seemed to have Plot Armor in previous routes. And since, this being a movie, the creators didn't have to hold back on the graphic material like in previous adaptations, you can also expect those deaths to NOT be pretty and the movie to show every excruciating detail. This also applies to the sexual content (particularly in the second movie), which in previous adaptations was infamously tip-toed around, partly because in previous routes, the sex scenes were a bit tacked-on due to the visual novel having originally been an eroge. However, Shirou and Sakura's relationship has a strong sexual component that is much more central to both the plot and their character development, so it would have been much more difficult to adapt out. Although the films never get as graphic as the visual novel in this respect, they don't shy away from showing it either.

The first preview can be viewed here

The first film, titled Fate/stay night: Heaven's Feel I. presage flower, was released on October 14, 2017. Aniplex USA has, naturally, picked up the movies and screened the first film in U.S. theatres, with the L.A. debut on November 3, 2017, with wider limited release beginning on November 18th. The English dubbed version was screened in theatres on June 5 and 7, 2018.

Madman Entertainment has picked up the movies for Australian & New Zealand release and premiered the first film at their MadFest Melbourne convention on November 4, 2017, with a wider release following after on November 16.

The final film, titled Fate/stay night: Heaven's Feel III. spring song was initially scheduled for release on March 28th, 2020, but was then delayed to April 25th due to the ongoing COVID-19 pandemic before finally being released on August 15th. French screenings for the movie occurred on September 5th and the 18th-20th and in Australia & New Zealand, Madman's cinematic release was on November 19th. Screenings in the United States and Canada occurred from November 18th-24th.

This page assumes that you watched Fate/Zero, Fate/Stay Night and Unlimited Blade Works anime, so there'll be unmarked spoilers.