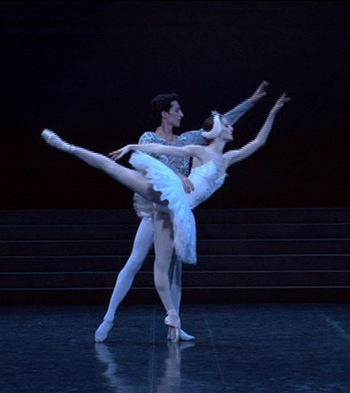 Swan Lake (Russian: Лебединое Озеро, Lebedinoye Ozero) is a ballet composed by Pyotr Ilyich Tchaikovsky in 1875-1876. The scenario, initially in four acts, by Vladimir Begichev and Vasiliy Geltser was fashioned from Russian folk tales as well as an ancient German legend. It tells the story of Odette, a girl turned into a swan by an evil sorcerer's curse, and her romance with Prince Siegfried, who vows to love only her and save her from the curse. The choreographer of the original production was Julius Reisinger. The ballet received its premiere on February 27, 1877, at the Bolshoi Theatre in Moscow as Le lac des cygnes ("The Lake of the Swans"), French being the language of the Imperial Russian court. Although it is presented in many different versions, most ballet companies base their stagings both choreographically and musically on the 1895 revival of Marius Petipa and Lev Ivanov, first staged for the Imperial Ballet on January 15, 1895, at the Mariinsky Theatre in St. Petersburg, Russia. For this revival, Tchaikovsky's score was revised by the St. Petersburg Imperial Theatre's chief conductor and composer Riccardo Drigo.

Many critics have disputed the original source of the Swan Lake story. The Russian ballet patriarch Fyodor Lopukhov has called Swan Lake a "national ballet" due to the swans which are common in Russian romantic lyrics, while many of the movements of the corps de ballet originated from Slavonic ring-dances. According to Lopukhov, "both the plot of Swan Lake (despite the fact that it is based on German source), the image of the Swan, and the very idea of a faithful love are essentially Russian". Though the scenario is (as in the case of The Nutcracker) tenuously based on a story by a German author, in this case Johann Karl August Musäus' Der geraubte Schleier ("The Stolen Veil"), this provides only the general outline of the plot; the Russian folktale "The White Duck" also bears some resemblance to the story of the ballet and might have been another possible source. The contemporaries of Tchaikovsky recalled the composer taking great interest in the life story of Ludwig II, the Bavarian King and Count Palatine of the Rhine, who was constantly associated with the symbol of the Swan, and whom "whether consciously or not" Tchaikovsky chose as the prototype of the dream-haunted Prince Siegfried.

Alongside The Nutcracker, also composed by Tchaikovsky, it's probably the most famous ballet of all time. Any time a character in a movie or a television series goes to the ballet, it's likely to be Swan Lake by default. Even the general public, which is largely ignorant to the ballet, is familiar with at least the basics of Swan Lake.

Works that are based on or revolve around Swan Lake include:

In Russian media Swan Lake is somewhat of a trope in its own right. If there is any scene involving ballet or ballet will be shown on TV it will always be Swan Lake. Always. Specifically "the dance of the little swans" scene.

Works that reference or include scenes from Swan Lake are:

, all normal television programs were shut down and all channels showed Swan Lake instead. Notably during the 2022 invasion of Ukraine, last remaining independent TV station TV Rain aired Swan Lake as their final broadcast before shutting down

Swan Lake has examples of: