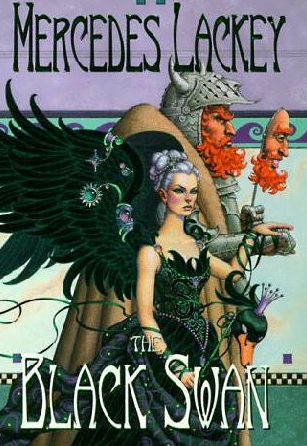 A fantasy novel by Mercedes Lackey, also known as the author of the Heralds of Valdemar and Elemental Masters series.
Advertisement:

Once upon a time there was a princess named Odette who was kidnapped by the evil sorcerer Eric von Rothbart and subjected to an unusual curse: she is human only at night under moonlight; by day she is a beautiful white swan.

This novel is not about her. This is about the other swan.

Odile von Rothbart is the dutiful daughter of her father and a rising sorceress in her own right. She keeps his palace without complaint, though she longs for more of her father's approval. Like the Baron, she believes the swan maidens are fickle, faithless creatures who deserve their situation because they have been untrue to their men. But then one day, Odette defies the sorcerer to give her a chance to prove her rehabilitation...

Perhaps the two swans are not so different after all.

Not to be confused with 2010's Black Swan film by Darren Aronofsky, or the 1942 swashbuckler movie by Tyrone Power. Also not related to the Dark Swan novel series by Richelle Mead.

The Black Swan features examples of: