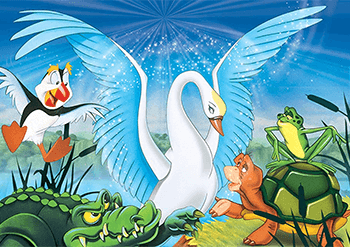 Ask a lot of folks what the most beautiful bird is, and they're very likely to say "swan." And really, why wouldn't other answers come up as often? Maybe it's because of their pure white plumage, their graceful movements, the legendary song they're said to make when they die, or the fact that their wings can break human bone.

Yes, you heard right — their wings can break human bone.note According to some

sources, that's a myth or at least an exaggeration. Even so, there's no denying that it would at minimum bruise and really hurt.

A lot of portrayals of swans in the media paint them as beautiful, peaceful birds, which isn't surprising considering that they're nigh-exclusively herbivorous.note Again, not really; swans are actually omnivores like most other water birds, and can and will eat things like insects, amphibians, fish and crustaceans, and on rare occasions, other birds! That said, however, peaceful they ain't — thanks to media depictions of them as almost angelic in behavior, not many people realize swans are very territorial birds and that a pissed-off swan will mess you up, especially during nesting season when they've got cygnets to protect - swans are among the greatest parents in the animal kingdom, and will protect their cygnets with their life against any predator or intruder, including careless humans. Nonetheless, that hasn't stopped folklore and fiction from portraying swans as symbols of purity, because their imagery is very similar to that of angels, and that includes the white feathers, and everyone knows that Light Is Good. They have also been used as symbols of love, due to their monogamous habits and the heart shape their necks make when two swans face each other. Many Shapeshifting Lovers are swans. The meme of the swan as graceful on the water and somewhat otherworldly has been influential on human minds, especially those who dwell in riverfaring cultures: witness the existence of Swan Boats in many cultures.

On a side note, expect all swans you see in pop culture to be white. Black swans and black-necked swans do exist, but they're only native to Australia and South America respectively, which explains why Western culture never even heard of them until around the 18th century or so. In fact, black swans were for a good while used as metaphors for something which could not exist, and later for something whose existence couldn't be predicted but is later rationalized as predictable

Swans are the largest members of the duck family, Anatidae. Contrast Foul Waterfowl, where water birds (like swans) are depicted as violent.