Literature / The Trumpet of the Swan 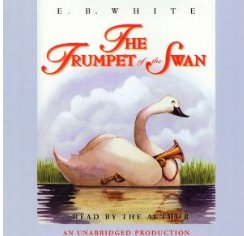 One day on a Canadian lake, a cob (male swan) and a pen (female swan) are saved by a boy named Sam Beaver from a fox. Sam is allowed to watch the swans' cygnets hatch, and it is discovered that one of them is mute. Instead of chirping to greet him, the mute cygnet pulls Sam's shoelace. Awww. Thus begins an Odd Friendship between swan and boy.

The story focuses on the swan, named Louis, and his efforts to overcome his handicap. Sam takes Louis to school so the bird can learn to read and write, and Louis's father steals a brass trumpet to give his son a voice. Feeling guilty over the theft, Louis leaves home to earn enough money to pay for the trumpet. Adventures are had by all.

In 2001, an animated film adaptation was released by Richard Rich (the director of The Swan Princess).

Alternative Title(s): The Trumpet Of The Swan