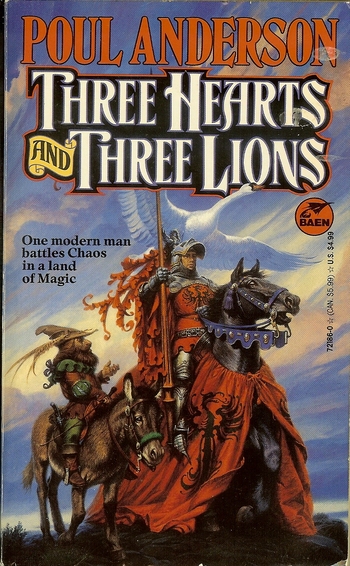 Three Hearts And Three Lions is a fantasy novel by Poul Anderson published in 1961, expanded from a 1953 novella by Anderson which appeared in Fantasy & Science Fiction.

During World War II, Holgar Carlsen is in Denmark, part of La Résistance. Except that at one crucial moment, he finds himself transported to a fantasy world, where the Matter of France from Chivalric Romance, Charlemagne and his paladins, is true. And that he has some sort of connection with this world that he can not remember. He has a pile of armor and a steed waiting for him.

A major influence on Dungeons & Dragons, as well as Michael Moorcock's saga of Elric of Melniboné.

Randall Garrett wrote a pun-filled Filk version of the novel, with Poul's approval.