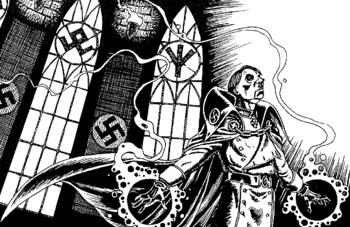 Major Eaton: I'm beginning to understand Hitler's interest in this.
Brody: Oh, yes. The Bible speaks of the Ark leveling mountains and laying waste to entire regions. An army which carries the Ark before it... is invincible.
— Raiders of the Lost Ark
Advertisement:

Pretty much everyone agrees that the Nazis were very, very bad. So, how do you make them even more intimidating? Why, by giving them Black Magic and Eldritch Abomination allies (or have them summon some, with various results), of course!

This is actually more plausible than it sounds. The Swastika is one of the oldest symbols in many religions, including Hinduism, and also became significant in some occult groups. Nazism's roots are arguably traceable to an occult group called the Thule Society. A primary focus of the Thule Society was a claim concerning the origins of the Aryan race, as the descendants of Atlantis (sometimes called Thule), depending on which rumour you listen to. A lot of the senior Nazis, most notoriously SS head Heinrich Himmler, were intensely interested in the occult. Himmler followed a religion called Armanenschaft which was, according to its believers, the original religion of the ancient Aryans, which later evolved into Norse Mythology and Hinduism.

Culturally, the country was also hip-deep in Teutonic tradition. Some senior Nazis apparently wanted to gradually abolish the Jewish-originated Christianity in favour of bringing back Germanic/Norse paganism, while others just wanted the state to absorb all the qualities of a religion instead, while another faction endorsed so-called "Positive Christianity", an attempt to create a national church that removed "Jewish" elements from Christianity, including the entirety of the Old Testament. In the present day, there exist factions in the neo-Nazi movement who also endorse a pagan revival, sometimes mixing Nietzsche in their rhetoric: Christianity was a fraud of "Slave Morality" that had resulted in the degeneration of the "racial traditions" and "master morals" of the Aryan race, and had been foisted upon Europe by the Jews.

Adolf Hitler himself was pretty skeptical of the occult and notions of mystical powers, and restricted secret societies out of fear that they would threaten the power of the Nazi Party, but nevertheless tried to get his hands on The Spear of Destiny mostly for propaganda value. Hitler's own religious beliefs are a matter of intense debate, not least because of contradictions in his own writings, not helped by how both sides of the debate tried to portray Hitler as either an atheist (when in fact, he absolutely hated them and ordered for them to be killed) or a religious fanatic (when he privately disparaged both Christianity and Himmler's paganism). The consensus is that Hitler never really cared about participating in any religious activity, but still believed in and spoke of God/Providence/Fate/Nature in a pantheistic manner.

One other benefit is that within your fantastical world, the true horrors of the Third Reich can "keep up" with your everyday fantastical horrors, rather than being overshadowed. The downside is that it can be a bit, well, silly, which can diminish the impact of the factual events; indeed, the Nazis are a common source of Even Evil Has Standards from more fantastic evils.

Alternatively, you can give the Nazis technology ahead of their time, resulting in Stupid Jetpack Hitler. Or leave that to Soviet Superscience, making the Eastern Front the front line of Magic Versus Science.