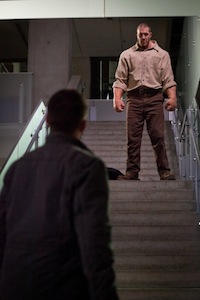 "Shaped by clay and brought to life by rabbis to protect the Jewish people in times of, I don't know, general crappiness."—Aaron
"A Jew, two Gentiles, and a golem walk into a bar. And it doesn't end with them coming out."
—Commandant Eckart [to Aaron, Sam, Dean, and the golem]
Advertisement:

The boys investigate the spontaneous combustion of a Rabbi who was a part of the Judah Initiative, one of the groups the Men of Letters were affiliated with. He turns out to have been researching Nazi necromancers. Then they're attacked by an out-of-control golem, and have to help the Rabbi's grandson stop it.

For this episode = 8 humans and 2 Thule necromancers.