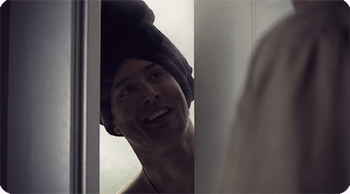 This shower is awesome.
Dean: Hunting's our day job. And the pay is crap.
Sam: Yeah, but hustling pool, credit card scams. It's not the most honest thing in the world, Dean.
Dean: Well, let's see. Honest...fun and easy. [thinks about it] It's no contest. Besides, we're good at it, it's what we were raised to do.

Sam: Yeah, well, how we were raised was jacked.

Sam and Dean investigate a series of bug-related attacks in a housing development in Oasis Plains, Oklahoma

. They pretend to be considering homes to buy for their father and attend an open house, where they learn there was another mysterious death of a surveyor which was blamed on an allergic reaction to bee stings. They also meet the family of Larry Pike the developer, including his son Matt, who collects bugs and tries to scare the realtor, Lynda Bloome, with a pet tarantula. When Lynda Bloome dies from spider bites, Sam and Dean initially suspect Matt. However, Matt shows them that insects and worms seem to be congregating in the area of the housing development. This leads them to the discovery of skeletal remains, which are thought to be Native American. They speak to Joe White Tree on a nearby reservation, who tells a story about a Yuchi tribe village, which was wiped out by American Calvary when they refused to relocate and the curse that was placed on this land by the village leader.

Sam and Dean realize the Pike family will all die if they stay in their home in the housing development and try to convince them to evacuate. When this fails, they all take shelter in the house, but the bugs come down the flue. Dean holds them off by spraying bug spray and lighting it on fire. They manage to make it to the attic, but eventually the termites eat through the roof. As the bugs start to swarm, the sun rises and the bugs leave. The Pike family moves out of the house and the father and son seem to have a better understanding of each other. Sam is also more determined to find his father as he has a new perspective on their past misunderstandings.