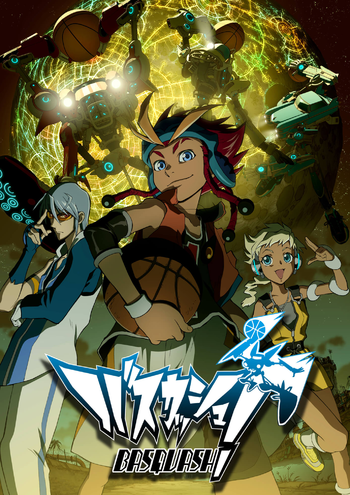 Voice: Basquash... what art thou?
Dan JD: Hey, windbag! Listen up! I'm Dan JD! The one and only original Basquasher!
Iceman Hotty: 'What art thou?' I'm Iceman! Iceman Hotty!
Dan: I am... ME!
Advertisement:

In a distant galaxy lies the planet Earth Dash. Above the planet's surface lies it's moon, Mooneyes, that houses a lunar city. It serves as both a symbol of hope and a dream for the people of Earth Dash, and holograms are regularly projected from the city's lights. The story begins in one city on Earth Dash, Rollingtown.

Dan JD is a hotblooded young man who goes around vandalizing the city as Dunk Mask, swearing revenge against the sport of Bigfoot Basketball, the latest craze. Bigfoots, which have replaced cars on Earth Dash, are giant, lumbering mecha that are used for everything from ambulances to police cars to the basketball game Dan hates, because one of them maimed his sister Coco years ago.

One day, Dan meets a mechanic who recently returned to Rollingtown, and knows all about the Bigfoots. Her name is Miyuki Ayukawa, and, to Dan's surprise, she's his childhood friend. Miyuki teaches Dan how to pilot a Bigfoot, and Dan, as Dunk Mask, goes to show Rollingtown how real basketball is played. In doing so, he causes massive property damage and is thrown in jail for a year. When he's finally free, he discovers that Bigfoot Street Basketball has become the new trend sport and Dunk Mask has become a legend.

Recent developments strongly suggest that there's more to the Moon, the sport of Basquash, and Dan's signature playstyle than you'd think...