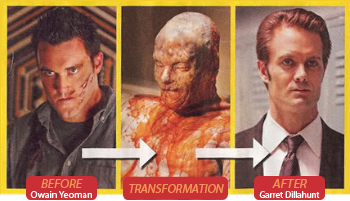 What you can do when your flesh is purely cosmetic.
"So in this story, Uta has an accident, then he has a plastic surgery. Now, I can simply change his actor. Easy, isn't it?"
— Akbar, Mimpi Metropolitan, Episode 58
Advertisement:

Some element of a show's Applied Phlebotinum causes a character's appearance, voice, and sometimes even their personality to change completely. On Speculative Fiction shows, this can be almost anything. On real-world shows, this is almost always Magic Plastic Surgery — which, on TV, works much better than it does in reality.

This is a catch-all for the recasting of a character using an in-continuity explanation. It takes its name from Doctor Who, whose eponymous Doctor is an alien capable of "regenerating" into a new form when mortally wounded. This trope, both in the original show and others which employ it, has two benefits; not only can it increase the series' run by offering a method to depict an immortal main character on a long-running show, it is also a wonderful way to derive drama, with the added bonus of implying that Anyone Can Die, without having to lose major characters. Depending on the importance of the character, changing him or her in such a way can serve as a "soft reboot" of an ongoing production.

Compare to: Suspiciously Similar Substitute (which introduces a totally new character much like the old one), The Other Darrin (where the actor is replaced without an in-universe explanation), and Legacy Character (which introduces a different character to the "title" of the previous character). See also Dying to Be Replaced (which this can involve if, as in the trope naming example, the process amounts to the death of the original) and Replacement Scrappy, which can be a reaction. For tropes where a character changes because of a transformation, see Mid-Season Upgrade, Evolution Power-Up, and Plot-Relevant Age-Up.

This is a casting trope, not a Reincarnation trope. This trope only requires the recasting to be explained in-universe, not necessarily by reincarnation.