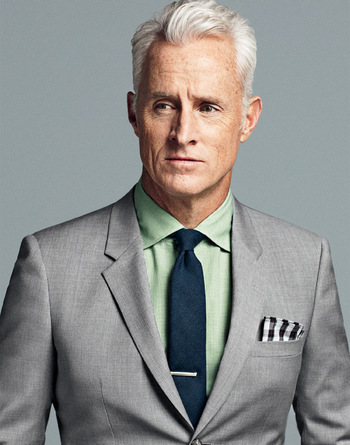 Slattery is perhaps best known for his role as Roger Sterling on AMC's Mad Men, for which he received four Emmy nominations in the Best Supporting Actor in a Drama Series category.note 2008, 2009, 2010, 2011

Outside of television, Slattery is recognizable for playing Howard Stark (father to Robert Downey Jr.'s Iron Man) in the Marvel Cinematic Universe, first appearing in 2010's Iron Man 2 and following that appearance up with cameos in 2015's Ant-Man and 2016's Captain America: Civil War. Each of his appearances to date have been posthumous in the franchise's timeline; Dominic Cooper plays a younger iteration of his character in 2011's Captain America: The First Avenger and ABC's Agent Carter.

Some of Slattery's other film credits include 2007's Charlie Wilson's War, 2011's The Adjustment Bureau, and 2015's Spotlight, which won the Academy Award for Best Picture.