Film / On Her Majesty's Secret Service 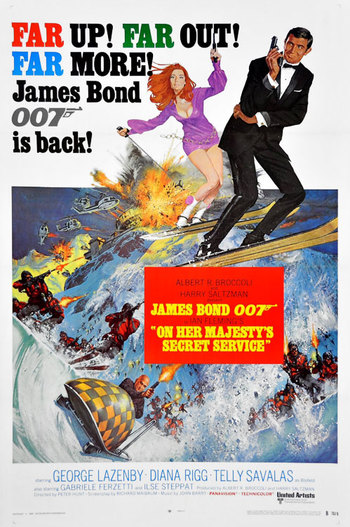 Every step of the way will find us...
"We have all the time in the world..."
— James Bond
Advertisement:

The One With… James Bond getting married.

The sixth James Bond film by Eon Productions, directed by Peter R. Hunt and starring George Lazenby in his only appearance.note His contract was for 7 movies, but he left because his agent thought spy movies were getting outdated, believing hippie movies were the way to go. After a couple of hippie movie flops, Lazenby finally decided he had enough and fired him. Though, technically, while this was his only appearance in the official Bond movie series, Lazenby played Bond three times - the two others being a cameo appearance in the film The Return of the Man from U.N.C.L.E. and an episode of Alfred Hitchcock Presents. It came out on December 18, 1969. It is the last Bond film not to have its Title Theme Tune performed by a singer, using a synthesizer heavy theme composed by John Barry instead.

One morning on the beach, James Bond rescues a beautiful, but emotionally shattered countess from drowning herself. Her father, the boss of one of Europe's largest organized crime syndicates, befriends Bond and suggests that he might woo her in order to help her deal with her issues. This is pretty sleazy even for Bond, but he agrees anyway because the mafioso has access to information beyond the reach of official organizations and can help him get a lead on the head of SPECTRE, Ernst Stavro Blofeld (played now by Telly Savalas). Blofeld, meanwhile, has developed a biological agent to induce sterility in plants and animals and potentially wipe out entire species, which he will put to use if he is not granted amnesty for all past crimes and an official acknowledgement of his bogus claim to nobility.

Easily one of the more low-key Bond films, in large part because it followed the book it adapted more faithfully than the previous instalments. It is one of the few Bond films to boast a prominent love story, with Blofeld's biological warfare scheme providing the backdrop. The Blofeld shown in this film has both a practical goal and a chillingly plausible plan — albeit, a completely over the top execution of said plan ("I have taught you to love chickens!").

The film took big strides in giving Bond himself emotional depth, a trend later picked up by the Timothy Dalton and Daniel Craig Bonds (in fact, No Time to Die even gives this one a few nods, even reusing John Barry's score).

Preceded by You Only Live Twice. There is also a twist Downer Ending and Sequel Hook that is quite unusual for the series, but which were largely ignored in the next instalment, Diamonds Are Forever (in which Sean Connery returned), though later it was addressed by Roger Moore in For Your Eyes Only.