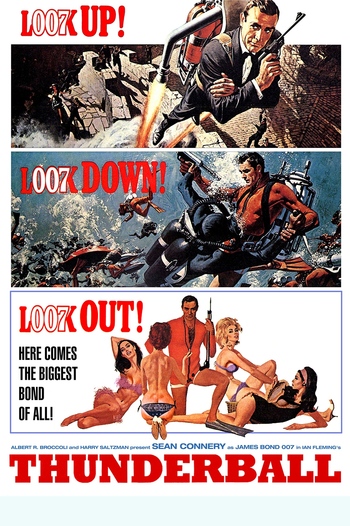 He looks at this world and wants it all...
James Bond: My dear girl, don't flatter yourself. What I did this evening was for King and country. You don't think it gave me any pleasure, do you?
Fiona Volpe: But of course, I forgot your ego, Mr. Bond. James Bond, the one where he has to make love to a woman, and she starts to hear heavenly choirs singing. She repents, and turns to the side of right and virtue... but not this one! What a blow it must have been. You, having a failure!
Advertisement:
James Bond: Well, you can't win them all.

The One With… the underwater scenes... And the Jetpack.

The fourth James Bond film by Eon Productions, Thunderball saw the return and last directing gig of Terence Young in the series, and starred Sean Connery. It came out on December 29, 1965 in the UK. The Title Theme Tune was sung by Tom Jones.

The SPECTRE organization hijacks two atomic bombs, and holds the major countries of the West to a hefty ransom, threatening to destroy two major cities. James Bond is dispatched to the Bahamas to investigate and stop them.

The storyline was recycled for the non-Eon Productions Bond film Never Say Never Again, in which a now much older Connery reprised his role as Bond. Columbia Pictures was (at one time) planning to remake Thunderball again, this time casting Connery as Ernst Stavro Blofield, but a court ruled against them in the matter of the rights to the James Bond character. MGM eventually bought out NSNA from its producer as leverage in the legal dispute.

Preceded by Goldfinger and followed by You Only Live Twice.

Ernst Blofeld (Anthony Dawson, dubbed by Eric Pohlmann) electrocutes an agent (Clive Cazes) for embezzling money from SPECTRE, though not before teasing his partner (Number Eleven) for the embezzlement.

Ernst Blofeld (Anthony Dawson, dubbed by Eric Pohlmann) electrocutes an agent (Clive Cazes) for embezzling money from SPECTRE, though not before teasing his partner (Number Eleven) for the embezzlement.