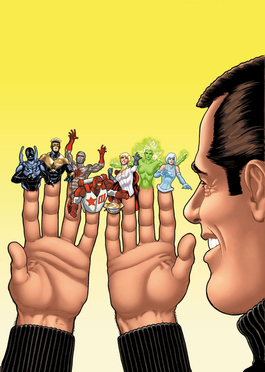 Meet Maxwell Lord. Wealthy Philanthropist. Founder and long-time leader of the Justice League International. Manipulative Sociopath.
My Dad always told me that the best place to hide is the last place that they would expect. And the Human Rights Organization is the last place anyone would ever expect to find some of the biggest human rights abusers in history.
— Jade, Bulletproof Monk
Advertisement:

There's an altruistic group or organization, often run by an idealist or goody two shoes chock full of nice guys and girls and legions of people generally with a motto of We Help the Helpless. Often the group in question is a charity organization dedicated to adopting forgotten orphans, finding homes and care for discarded animals, curing disease, spreading peaceful spirituality, or advancing human rights in a peaceful manner.

And then one day or perhaps from the beginning, either as part of an Evil Plan, a cover-up, or just a Face–Heel Turn, a bad guy ends up running it. Often villains would refuse the chance because all those goody goodies would be consistently around them, but some take the chance to use it to their advantage. Rarely are these villains anything but a Bad Samaritan, Bitch in Sheep's Clothing, Treacherous Quest Giver, or Faux Affably Evil characters, but at times they may be genuinely polite, proper, and thoughtful folk. They just happen to have sinister pastimes on the side or a grand malevolent goal in the future.

The difficulty of this task varies depending on how closely the activity of the bad guy in question in monitored. Due to the circumstance of the good people being ignorant or unaware of the bad guy's activities, the organization is often turn into a front for criminal activity or just a Fake Charity. Most of the time, the plot is about the villain using their organization for a greater goal as a Manipulative Bastard or Chessmaster; occasionally, though, the villain may actually run the organization for personal reasons that are not related to their own malevolence.

Polar Inverse to Good Running Evil. Often a sister trope to Tyrant Takes the Helm if the figure in question is newly appointed after a benevolent boss has been removed. The malevolent figure in question is often a Mole in Charge if working for a separate sinister organization. If not, it is often a case of Conspiracy Redemption for a protagonist who has joined the organization. See also Running Both Sides.

Compare The Paragon Always Rebels where the good leader turns evil, rather than turning out to be evil from the get-go. Compare also Covert Group with Mundane Front.

Warning. Spoilers will be unmarked ahead.