Fed to the Beast 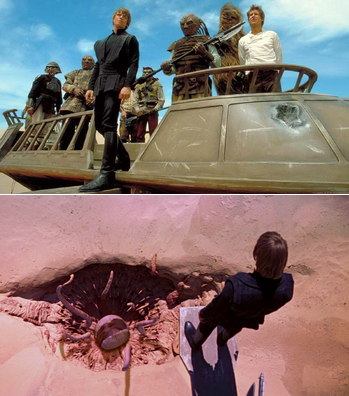 That's one helluva sand trap.
Chairface: Unfortunately, the three of you aren't going to be around to witness my historic crime, because I'm going to feed you to my pit of ferocious man-eating alligators.
Arthur: What? What? (to Tick) WHAT?!
The Tick: *Ahem* Standard villain procedure.
— The Tick
Advertisement:

Feeding people to monsters or man-eating animals is one of the classic perils that villains and others subject people to.

Sometimes this is a Human Sacrifice to a demon, dragon, alien creature, Eldritch Abomination, or some other monster or beast. These scenarios usually have some poor unfortunate Chained to a Rock awaiting their doom. Maybe the local religion is a Giant Animal Worship which demands this to be done to Appease the Volcano God. Maybe the monster wants tribute in the form of people to eat, such as with many dragons. Maybe this is even meant as a punishment, in the case of Daniel in the lion's den from The Bible or Andromeda from Classical Mythology.

Other times, the beast is a Right-Hand Attack Dog — a pet or other creature that the villain keeps around for some reason, which he uses to dispose of victims, and more than one villain's underling has met their end in this way, usually after they've failed him or outlived their usefulness. If a villain tries to do this to the hero, expect the hero to kill the beast or escape in some other fashion. It's also not uncommon for villains fond of feeding people to beasts to meet their end by being eaten by the beast in turn, if the hero doesn't kill the beast beforehand.

Another possibility is that the villain may set up the hero to be killed by local wildlife to obscure his own responsibility for the death.

The Shark Pool and the Snake Pit are two quite common forms of this particular trope. So is Fed to Pigs, although the victim is usually already dead in that case. (Usually.) Also related as Animal Assassin, a more clandestine way of killing people using animals.

See also Just Desserts, Eaten Alive, and Eat Me. May overlap with Throw 'Em to the Wolves (although in that trope metaphorical "wolves" are also allowed) and Exit, Pursued by a Bear.

Subtrope of Eating the Enemy

Jabba the Hutt sends Luke into the rancor pit.

Jabba the Hutt sends Luke into the rancor pit.