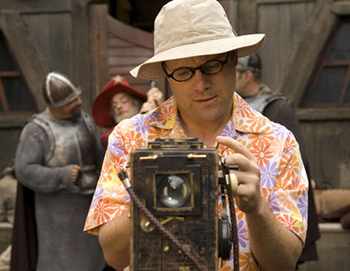 "Twoflower was a tourist, the first ever seen on the Discworld. Tourist, Rincewind had decided, meant 'idiot.'"
Advertisement:

The stereotypical dress for a tourist/someone on vacation (especially your Ugly American) is a very specific set of Impossibly Tacky Clothes: a Hawaiian aloha shirt (whether or not they're actually in Hawaii), sandals (usually worn with socks), and often a Panama Hat and sunglasses as well. Note that the dress can be permanent for a character with a carefree personality, and it doesn't seem to depend upon tropical weather for a character to dress this way. Tourist characters may also have a bulky camera hung around their neck. If male, his Distaff Counterpart is likely to have a pristine white tennis outfit, or occasionally a Muumuu; if she wears a hat or a pair of sunglasses, it will probably have a price tag dangling from one side, Minnie Pearl style.