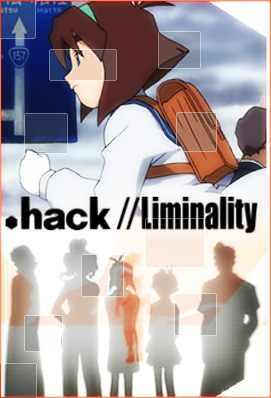 .hack//Liminality is a 4-episode OVA which deals with what is occurring in the real world during the time period of the .hack R1 Games. The OVA was originally distributed as a bonus with the games, with one DVD per installment, released from 2002 to 2003. However, subsequent re-releases haven't included the DVDs, and they can be hard to find used. In Japan, the OVAs were re-released separately as part of ".hack//Integration", a campaign to help consolidate the multimedia franchise. Liminality is unique among .hack// in that it is set entirely in the real world; there are a few segments where the characters play the game, but we never see the game through their eyes during these scenes.

The plot deals with former CC Corp Employee Junichiro Tokuoka investigating the mysterious comas that players are falling into while playing The World. He first runs into Mai Minase, who managed to avoid falling into a coma, even though the boy she was playing with did. The two team up, and eventually meet with two of the boy's online friends to enact a plan and help wake the coma victims up.

See .hack for information about the franchise as a whole.

There are character sheets.