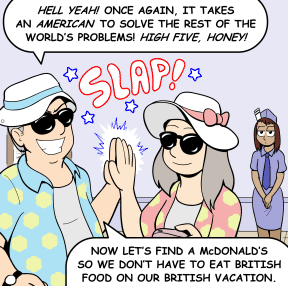 "For some reason, the [American] people I meet in my country are not the same as the ones I knew in the United States. A mysterious change seems to come over Americans when they go to a foreign land. They isolate themselves socially. They live pretentiously. They are loud and ostentatious."
— U Maung Swe, The Ugly American
Advertisement:

When American citizens go abroad, they will be arrogant, shameless, entitled, rude, and ignorant.

The stereotype is most often applied to American tourists, expats or diplomats, since they are in the best position to interact with foreign cultures. They will be portrayed as unappreciative of and disrespectful to the culture, prone to comparing things negatively to how they are back home, and often expecting the locals to cater to them and throwing a fit when they don't get what they want. (To top it off, most portrayals of this involve white Americans, which highlights the cultural disconnect if they are in a country that isn't mostly white.) However, it can be applied to any type of American character. Businessmen in town for some dealings? Money-obsessed and all too ready to screw over their foreign partners. Celebrities on vacation? Tacky Nouveau Riche Rich Bitches compared to proper European Old Money. Foreign Exchange Students? Lazy and entitled. Its fictional leaders arriving for diplomatic meetings? Only concerned with American growth. Religious missionaries? Fire and Brimstone preachers with drawling accents and racism. Two or more Americans talking to each other? Expect lots of profanity.

This is a common stereotype

in many parts of the world for a variety of reasons. One is American individualism and values of freedom of expression contrasting the collectivism of many other cultures; unlike in most cultures that value social harmony and peace at the expense of individual expression (e.g. Japanese Politeness), in America speaking your mind out is actively encouraged, even if it is critical of superior institutions, or offensive. This is paired with a belief in American exceptionalism and/or twisted or exaggerated into extreme self-centeredness. The US's position as a dominant military and economic world power and the high purchasing power of the dollar (allowing a not-wealthy American to live large elsewhere) in many countries are other factors. There's also the recurring stereotype of Americans suffering from Global Ignorance. Could as well be a result of feelings of insecurity and isolation stemming from being in a different, unfamiliar place, coupled with popular notions that everyone else in the world hates Americans.

However, it is not uncommon for American writers to portray Americans in this way as a form of Self-Deprecation. And although this stereotype usually applies when Americans visit other countries, it could also apply to a sympathetic foreigner reacting to a rude American on home soil.

The Trope Namer is "Ugly American"

◊, a 1948 photograph of an American tourist in Cuba by Constantino Arias. The phrase entered public consciousness with The Ugly American (not the show Ugly Americans). However, the trope goes at least as far back as Mark Twain's The Innocents Abroad.

Very related to Eagleland — the implication is that the United States is perceived either by the writers or the characters as the America the Boorish, which is why the characters representing them act this way. More forgiving versions of this trope will draw from the Mixed flavor of Eagleland and portray them as clueless and occasionally insensitive, but good-hearted. Note that a character's uncouthness must stand out because they are specifically from the USA; one rude American in a cast of other Americans is not an example unless the stereotype is talked about.

Compare Americans Are Cowboys, Hawaiian-Shirted Tourist — to drive home the stereotype, an Ugly American might wear a cowboy hat or a Hawaiian shirt, or a bathing suit in a situation where it's not appropriate. They are also likely to be overweight or obese. See also Asian Rudeness, French Jerk, and Japanese Tourist. No Real Life Examples, Please!