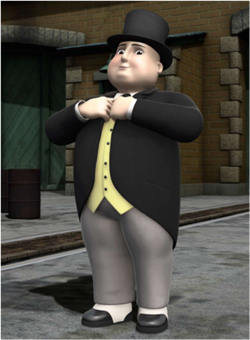 As it happens, in a hierarchical organisation, especially of a military or religious nature, it's often easy to tell who's in charge by comparing the size or overall grandiosity of their hat (or other headgear). If only one person has a hat, that one is definitely the leader. Conversely, if every member has a hat but one, the bareheaded one is the leader, because Helmets Are Hardly Heroic.

In military groups where everyone has a helmet, the leader's will be marked out in some way, probably by being a special color such as red or gold, and it will have extra doodads on it to boot.

Subtrope of Nice Hat. A hat of authority may or may not also be a Hat of Power.

The Pakled's hierarchy is determined by who has the biggest helmet.

The Pakled's hierarchy is determined by who has the biggest helmet.