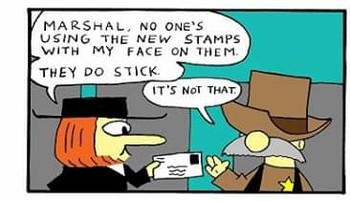 Poison Ivy Gulch is a gag Western webcomic created by Max West and launched on June 1, 2020. The setting is in a ramshackle town somewhere in the American frontier of the 1870s. The eponymous town is home to Lotta Doler, a Professional Gambler plus her Kid Sidekick Ace and a load of other Western Characters.

Some (but not all) of the other characters are:

Has a Characters page under construction. A first book collection has been announced for 2022.

Updated on Mondays, Wednesdays and Fridays with the sporadic Sunday Strip, the format is a gag per day in black and white panels much like Newspaper Comics.

This Webcomic Has The Following Tropes: