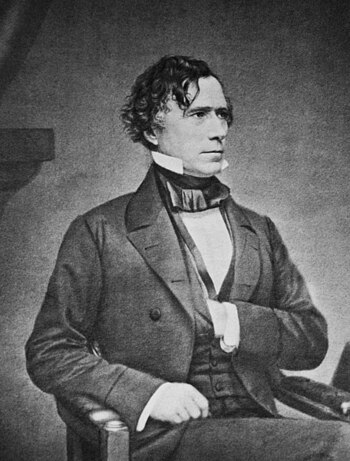 The hero of many a well-fought bottle.
"Frank Perse was rale sot be down to Dover. He was a good deal of a man f'r Dover an' f'r Strafford County; indeed he done very well f'r th' State o' Noo Hampshire; but when ye come t' spread him over t' United States he was a l-e-e-tle thin."
—New Hampshire farmer reminiscing about Pierce, recorded in The Yale Review, 1916.
Advertisement:

Franklin Pierce (November 23, 1804 – October 8, 1869) was the fourteenth President of the United States, immediately following Millard Fillmore and preceding James Buchanan, serving from 1853 to 1857, and the fourth from the Democratic Party. He was technically the first president born in the 19th century; Millard Fillmore was born in 1800, which is part of the 18th century. He was a Representative and Senator from New Hampshire beforehand, and a brigadier general during the Mexican-American War. He pronounced his surname "Purse", though, even at the time, almost everyone else pronounced it as spelled anyway. He's the lesser-known of the two historical namesakes of Benjamin Franklin Pierce, the other being... well...

Nicknamed "Handsome Frank," Pierce won by a very significant margin. Like another young, good-looking president, Pierce won largely on the appeal that a young president could fix the problems that the older generation could not. It helped that his speedy nomination was more than a little reminiscent of James K. Polk. The Democrats played up this similarity with their campaign slogan: "We Polked you in 1844; we shall Pierce you in 1852." You may groan now. The Whig party unintentionally helped him by nominating yet another aging general (Winfield Scott) as their own candidate, seemingly forgetting what had happened the previous two times they tried this, and the electorate decided they'd prefer another young, handsome President over an old guy that had a significant chance of dying while in officenote (ironically, Scott not only lived through Pierce's term as President, but, despite being 18 years older than Pierce, would predecease him by only three years). Pierce won an electoral victory so comprehensive that both the major opposition parties, the Whigs and the Free Soil party, totally collapsed in the aftermath of the election. Sadly, it was all downhill from here.

Pierce "affirmed" his oath of office rather than "swore" it, since he placed his hand on a law book instead of a Bible. He also recited the entire oath from memory for his inauguration. His Vice President, William R. King, died forty-five days in office. Pierce had no vice president for the rest of his term, because that's how things rolled back then.

During his presidency, Senator Stephen A. Douglas strong-armed Pierce into signing the Kansas-Nebraska act, effectively nullifying the 1850 Compromise signed by Millard Fillmore and the Missouri Compromise signed by James Monroe and reopened the western territories to slavery. Ironically, Douglas believed slavery was a cancer to the Union and preached about the illegality of secession. The Kansas and Nebraska Territories each voted on whether to be a slave or free state, and many Missouri voters illegally snuck into Kansas and voted in favor of slavery. This led to years of fighting between the pro-slavery and anti-slavery factions of the state known as "Bleeding Kansas," which was basically a preview of things to come in just a few years for the rest of the nation. Also, just like Polk before him, American ambassadors attempted to buy Cuba from Spain to much controversy, with many believing that it was an attempt to expand slavery. The Gadsden Purchase, which bought the southern parts of Arizona and New Mexico from Mexico, experienced similar reactions. Due to the many troubles of his term and his inability to solve any of them, he lost the party's nomination during the 1856 election. Often ranked as one of the worst presidents, and, accordingly, has been forgotten by most of the modern American public.

All nasty evaluations aside, Pierce's signature did bring the last major piece of the current contiguous US into the country. All future territorial acquisitions of the US would either be far-away islands or Alaska.

Mrs. Pierce was very much against her husband's political career, viewing it as sinful, and apparently got him to promise that he'd quit mere moments before he was nominated for the presidency. She spent most of the campaign praying he would lose. The Pierces were involved in a train wreck shortly before the inauguration, in which their only living child, Benny, was brutally decapitated right before his parents' eyes. Mrs. Pierce was convinced God had taken their son so as not to distract her husband during his presidency; the incident made her mentally ill and distant from others for the rest of her life. Pierce was a heavy drinker for much of his life, especially after the death of his children. He was able to quit drinking after he left the White House, and then, after his wife died following a few rocky years, he relapsed pretty hard. You would think people would remember that.

After he left office, he became even more unpopular when he declared his support of the Confederacy, and he had ties to Jefferson Davis (who was his Secretary of War). He was a good friend of writer Nathaniel Hawthorne, and made him America's consul in Liverpool. When Hawthorne's health failed, he took the writer on vacation and unexpectedly ended up witnessing his death. When Abraham Lincoln was shot, Pierce didn't place a flag in front of his home, the symbol of mourning throughout the nation. A mob confronted him at his house over this, which he angrily dispersed by citing his military and civil service, saying he had no need for a public gesture. Pierce died from cirrhosis of the liver in 1869. His will left a large number of unusual requests to many of his friends and family. Pierce was buried next to his wife and children.