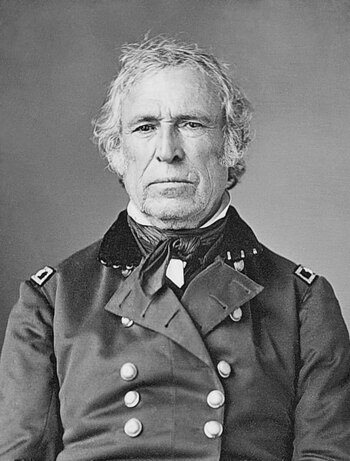 "I regret nothing, but I am sorry that I am about to leave my friends."
—Zachary Taylor's last words
Advertisement:

Zachary Taylor (November 24, 1784 – July 9, 1850) was the twelfth President of the United States (serving from 1849 to 1850) and the third from the Whig Party. He succeeded James K. Polk and preceded Millard Fillmore. Known as "Old Rough And Ready" for his service as a General during the Mexican-American War. According to legend, he was elected without ever having voted before. His only really notable actions in office were convincing California and New Mexico to bypass the territorial stage and apply for statehood (though only California did) and signing the Clayton-Bulwer Treaty, where America and the United Kingdom promised not to build or claim a canal across Nicaragua.

Taylor died a little over 16 months after taking office- to quote Badass of the Week: "One of the toughest, most badass generals and commanders in American history was replaced by some dude named Millard." He was the second president to die in office—the cause of death was at the time said to be a bowl of cherries that were cooled with contaminated ice, but even at the time of his death people were suspicious that he had been poisoned with arsenic. In 1991 they exhumed his body and tested his hair for arsenic. The test came out normal, but at least one medical doctor has pointed out that the test was administered in a way that would uncover chronic poisoning but would at best be useless in discovering acute poisoning, the exact cause remains in dispute.

He was also the second member of the Whig party to be elected president (John Tyler succeeded, and was expelled from the party while in office). The first was William Henry Harrison, who lasted all of 31 days. They were the first two presidents to die while in office. For some reason, the Whig party isn't around anymore. For what it's worth, Taylor is widely considered to have been the best Whig president by a country mile, simply because he was around long enough to get a few positive things done, while not lasting long enough to become a total screw-up. At the same time though, he didn't last long enough to achieve anything that would rank him higher than in the bottom-third or so of the Presidents.

His "Rough and Ready" exterior hid his political savvy. He was well connected out the wazoo. Former president James Madison and General Robert E. Lee were his cousins and Mississippi Senator Jefferson Davis was his son-in-law. It was in his administration that slavery consumed American politics. He was an ardent Unionist (paraphrased: "I'll hang every secessionist there is, starting with that son-in-law of mine.") and he was willing to use force to prevent secession. Many historians now agree that his more aggressive and uncompromising approach towards the slave states was in retrospect the correct one — as opposed to the approaches taken by his three successors, which were conciliatory at best, and Head-in-the-Sand Management at worst — though what actual results this would have produced had Taylor lived is still hotly debated. Interestingly, he was still a slaveowner; the last sitting president to own slaves, actually (Andrew Johnson had also been a slaveowner, but he freed his slaves in 1863, two years before he became President).

Taylor deferred his inauguration for a day because he declined to take the oath of office on Sunday. This later gave rise to the notion that David Rice Atchison (president pro tempore of the outgoing Senate, that being the office next in line after the President and Vice President by the succession law of the time) was "President for a day" (specifically, March 4, 1849). A short list of reasons why this isn't so:

Incidentally, a reporter asked Atchison about this in 1872. Atchison said that he was unsure whether he had technically been president, and snarked that if he was, then at least his administration had been free of scandal.

Modern researchers who have gone through his letters have described him as "near illiterate." Taylor did not have much formal schooling and would have been diagnosed with dyslexia and dysgraphia today.

He is to date the only president to come from Louisiana. Stephen Colbert now owns a wax figure of him.note He actually wanted Martin Van Buren, but Jon Stewart got it first.